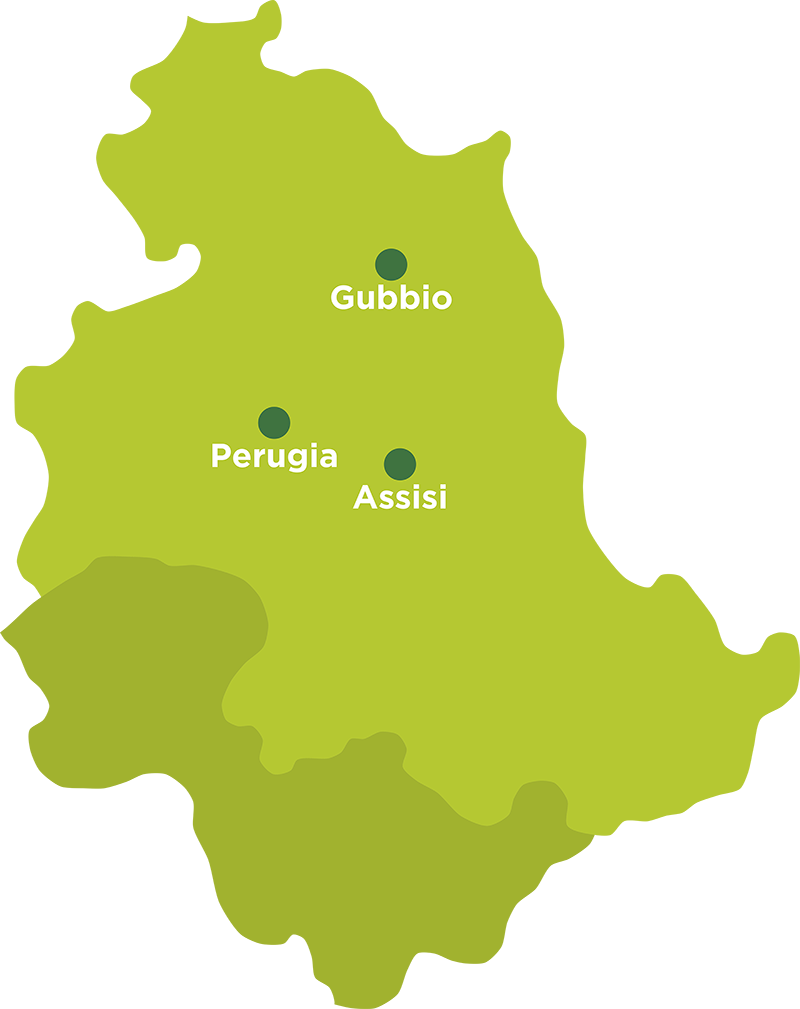 The central northern area of ​​Umbria, where the cities of Gubbio, Assisi and Perugia are located, is an area with an ancient history, the keeper of unique traditions and rich in naturalistic and architectural beauties. A real treasure chest ideal for carving out a corner of peace and serenity, away from the frenzy of everyday life. In a few kilometers the gentle Umbrian hills give way to the Apennine mountains, with the Monte Cucco Park. An ideal environment for all outdoor activities, such as trekking and biking or, for those in search of strong emotions, canyoning, hang gliding and paragliding, guided cave tours. If, on the other hand, you prefer a more quite approach, you can opt for a visit to the wineries with relative tasting. 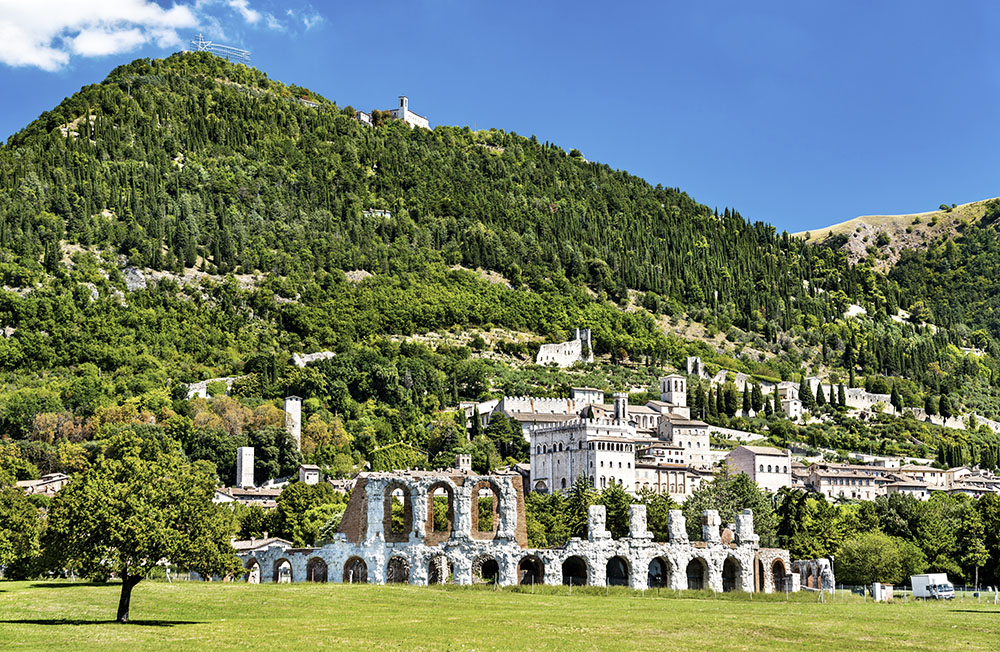 Gubbio is an ancient city, whose origins date back to the Middle Paleolithic. A city that has gone through many eras, from the pre-Roman civilization of the Umbrians to ancient Rome, from the Byzantines to the Lombards. But its characteristic architecture, its image still so strong, clear and decisive, testifies to the prosperity of the city of Gubbio in the Middle Ages, and in particular in the 14th and first half of the 15th century and, subsequently, in the early Renaissance, under the domination of the Montefeltro.
A unique and well-preserved historic center, where stone is the predominant element. From the Palazzo dei Consoli to the Palazzo Ducale, from the Duomo to the numerous churches, in every building it is the stone that speaks, that tells the city.
Not to mention the Roman Theatre and the Basilica of Sant’Ubaldo on top of Monte Ingino. The characteristics streets and picturesque alleys, the verticality of the upper part of the city, the imposing walls. Gubbio is a real medieval pearl, a lively city rich in history and tradition. Walking through the old town is possible to come across numerous shops where, with passion, master craftsmen preserve the art and the wisdom of ancient crafts, traditions still alive today that have gone through the centuries.
Gubbio is surrounded by an imposing, lush nature, which offers many possibilities for relax and fun. The proximity to the Monte Cucco Park and the caves, the many ideal paths for trekking and biking. In short, there is something for everyone. 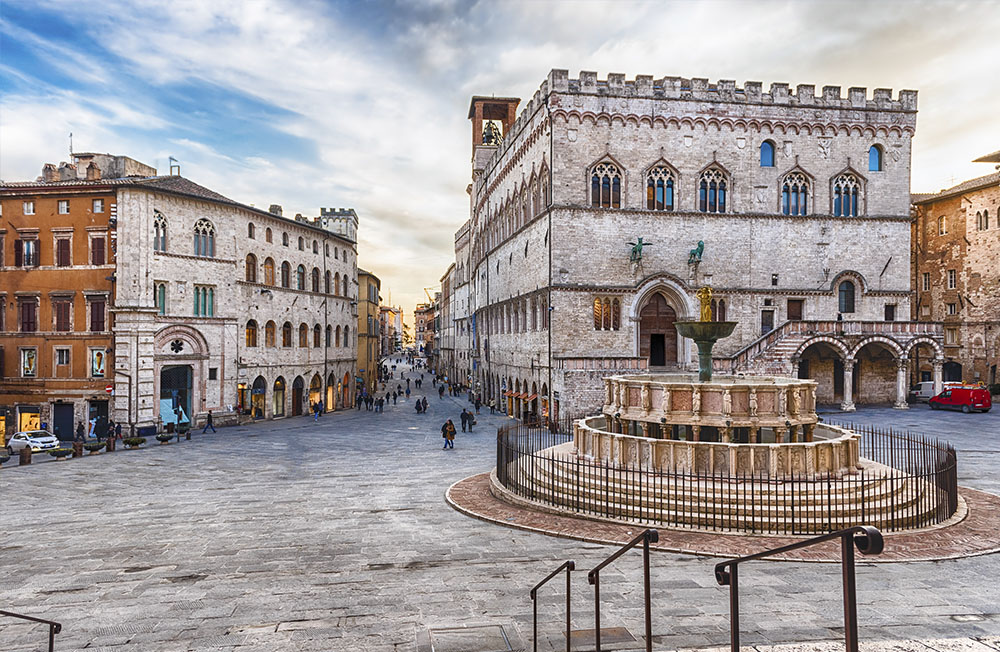 Perugia, the capital of the Umbria Region, was a very important Etruscan center and, later, a thriving medieval city. Even today it preserves intact the characteristics, evident in architecture and in art, of the historical periods it went through.
Perugia has been home to the important University for over 700 years, as well as hosting the historic Academy of Fine Arts, the Conservatory of Music and exhibitions such as Umbria Jazz.
Perugia is set in the characteristic Umbrian hills, a few kilometers from Trasimeno lake and close to all the most important Umbrian cities. 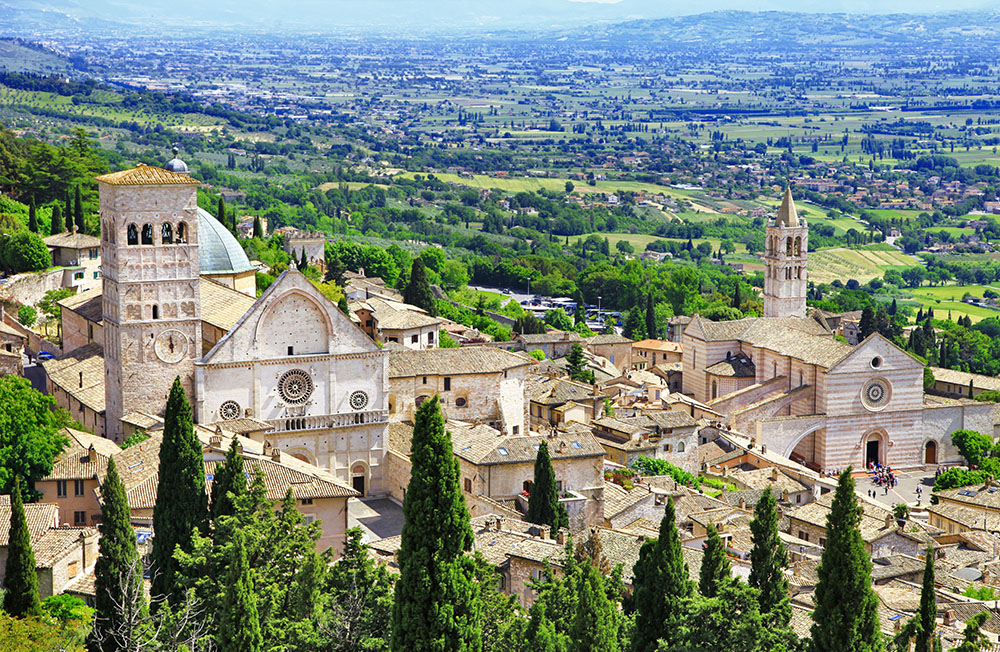 Assisi, lying on the slopes of Mount Subasio, is the city famous all over the world for St. Francis. A city-sanctuary that preserves very well the testimonies of its Umbrian and Roman origins and its Medieval past. The imposing Basilica of San Francesco attracts, every yoear, millions of pilgrims from all over the world. A place with a special atmosphere, with a strong spirituality, which offers an enormous artistic wealth.